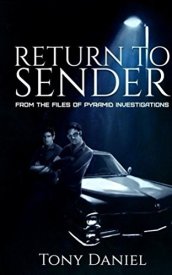 Every town has its ghost stories, and Atlanta is no exception. Crockett and Memphis Pete are just two ordinary guys caught up in them. The only thing is Crockett has become an unwitting medium who smokes too much and Pete is the reanimated mummy of a priest of Osiris obsessed with Elvis Presley. Together they help the various spirits of Atlanta and its environs find their way home.  When a legendary lost Confederate shipment of gold becomes the target of a voodoo master and a delusional historian, it’s up to the two hapless paranormal investigators to do whatever they can to make sure the good guys win. It’s a race against the clock, and time is almost up. (Goodreads.com)

Y’all. Here’s the thing: GO OUT AND GET THIS BOOK IMMEDIATELY. Okay, that wasn’t the thing I was thinking of – really it’s more that I don’t read crime fiction very often, but this one has the hook that will get me into most other genres: the paranormal.

Crockett and Pete are an excellent duo, and I mentioned to the author yesterday that after reading this I now hear everything in Mama Lady’s accent, so there’s that too. Excellent character development, with the exception MAYBE of Lucinda, but that’s not her fault that she’s a bit of a secondary story arc that is thrust into the main spotlight about halfway through. In fact, if I had any complaint about this novel, it might have been that I think the author could have developed the story in this into several novels, like a series. But that could be due to my own habit of writing books that are way too long for normal people to read.

In truth, this book was an easy read – because the scenes just flow into each other effortlessly, like a good play where you don’t realize you’ve left beat one and moved into beat two until you’re on the verge of beat three. The author clearly did his homework – since it is set in Atlanta I knew a lot of the places mentioned in the novel and never ONCE did I think anything like, “Hey, wait, he put the Varsity in the middle of Oakland Cemetary.” The characters, as I mentioned above, are compelling. I know that someone has worked hard on a character when I hear a different voice in my head as I’m reading.

I can’t seem to say anything that I want to say without spoilers, so I will just give you some bullet points that were highlights for me:

*I purchased this book on my own, and am making this review on my own. I was not asked by the author or publisher to review this title.